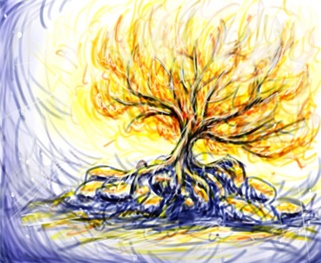 ‘I AM WHO I AM,’ God replies. ‘Tell them that the LORD has sent you to them. This is the name generations will call me by.’
Moses and the Burning Bush 1 Now Moses was tending the flock of Jethro his father-in-law, the priest of Midian, and he led the flock to the far side of the wilderness and came to Horeb, the mountain of God. 2 There the angel of the LORD appeared to him in flames of fire from within a bush. Moses saw that though the bush was on fire it did not burn up. 3 So Moses thought, “I will go over and see this strange sight—why the bush does not burn up.”
4 When the LORD saw that he had gone over to look, God called to him from within the bush, “Moses! Moses!”
And Moses said, “Here I am.”
5 “Do not come any closer,” God said. “Take off your sandals, for the place where you are standing is holy ground.” 6 Then he said, “I am the God of your father,[a] the God of Abraham, the God of Isaac and the God of Jacob.” At this, Moses hid his face, because he was afraid to look at God.
7 The LORD said, “I have indeed seen the misery of my people in Egypt. I have heard them crying out because of their slave drivers, and I am concerned about their suffering. 8 So I have come down to rescue them from the hand of the Egyptians and to bring them up out of that land into a good and spacious land, a land flowing with milk and honey—the home of the Canaanites, Hittites, Amorites, Perizzites, Hivites and Jebusites. 9 And now the cry of the Israelites has reached me, and I have seen the way the Egyptians are oppressing them. 10 So now, go. I am sending you to Pharaoh to bring my people the Israelites out of Egypt.”
11 But Moses said to God, “Who am I that I should go to Pharaoh and bring the Israelites out of Egypt?”
12 And God said, “I will be with you. And this will be the sign to you that it is I who have sent you: When you have brought the people out of Egypt, you[b] will worship God on this mountain.”
13 Moses said to God, “Suppose I go to the Israelites and say to them, ‘The God of your fathers has sent me to you,’ and they ask me, ‘What is his name?’ Then what shall I tell them?”
14 God said to Moses, “I AM WHO I AM.[c] This is what you are to say to the Israelites: ‘I AM has sent me to you.’”
15 God also said to Moses, “Say to the Israelites, ‘The LORD,[d] the God of your fathers—the God of Abraham, the God of Isaac and the God of Jacob—has sent me to you.’
“This is my name forever,
the name you shall call me
from generation to generation.
16 “Go, assemble the elders of Israel and say to them, ‘The LORD, the God of your fathers—the God of Abraham, Isaac and Jacob—appeared to me and said: I have watched over you and have seen what has been done to you in Egypt. 17 And I have promised to bring you up out of your misery in Egypt into the land of the Canaanites, Hittites, Amorites, Perizzites, Hivites and Jebusites—a land flowing with milk and honey.’
18 “The elders of Israel will listen to you. Then you and the elders are to go to the king of Egypt and say to him, ‘The LORD, the God of the Hebrews, has met with us. Let us take a three-day journey into the wilderness to offer sacrifices to the LORD our God.’ 19 But I know that the king of Egypt will not let you go unless a mighty hand compels him. 20 So I will stretch out my hand and strike the Egyptians with all the wonders that I will perform among them. After that, he will let you go.
21 “And I will make the Egyptians favorably disposed toward this people, so that when you leave you will not go empty-handed. 22 Every woman is to ask her neighbor and any woman living in her house for articles of silver and gold and for clothing, which you will put on your sons and daughters. And so you will plunder the Egyptians.”

While Moses was tending the flocks of his father-in-law near Horeb a curious sight appeared to him. An angel of God came to Moses in the form of a bush that was alight with flames but did not burn into ash. Curious, Moses drew closer.
As he drew nearer the voice of God called out his name. Moses responded, “Her I am”, and God instructed him to not come any closer and to remove his sandals for Moses was on holy ground. Then God told Moses that he or she was the God of his fathers Abraham and Isaac. Like many whom the LORD had appeared to, Moses hide his face in fear. God speaks the familiar words, “Do not be afraid.”
God goes on to tell Moses that he has heard the cry of his or her people, the Israelites. God has seen their oppression and pained caused by the rough slave masters will. Furthermore, God has a plan to deliver his or her people to a promised land of milk and honey already inhabited by several tribes such as the Canaanites. Here’s the kicker- God plans to send Moses as their leader out of slavery.
Moses immediately begins to question who he is to be the Israelites leader, but God assures Moses that his or her presence will be with him all the way. God tells Joseph that this burning bush is the sign and to bring his people back to worship their God when they have been led out of bondage.
Still Moses is not convinced. He asks God’s name to give to the Israelites if they should ask. ‘I AM WHO I AM,’ God replies. ‘Tell them that the LORD has sent you to them. This is the name generations will call me by.’
God then tells Moses to gather the elders and tell them that God has seen the injustice that has happened to the Israelites in Egypt and will deliver them into a land of milk and honey. God assures him that the elders will listen to him. Then Moses is to go to the king of Egypt and tell him that the God of the Hebrews has meet with them and that they are to go three days into the wilderness and sacrifice animals to the LORD.
Already God foresees obstacles in Moses way. The king of Egypt will not agree to go with Moses, but God intends to show the Egyptians his or her power and awe. Then the king will let the Israelites go. God also intends to send the Hebrews off with goods. He or she will make the Egyptians disposed to the Israelites when they ask for gold and silver adornments to clothe themselves in.
What is calling your name in life right now? What do you feel God’s plan for your life is?